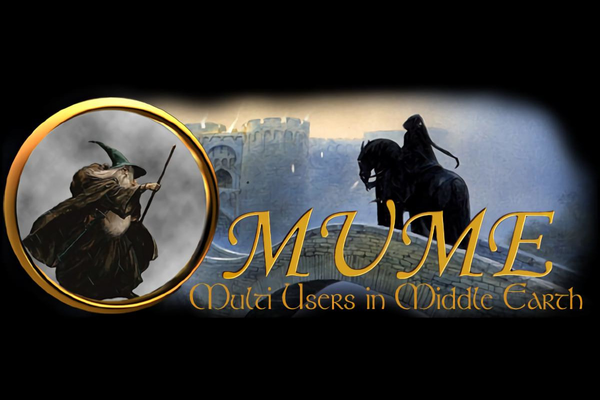 MUME, Multi-Users in Middle-earth, is a DikuMUD based upon J.R.R. Tolkien’s Middle-earth that has been continuously running, enhanced, and remastered since fall of 1991. In MUME, players are encouraged to roleplay as they live in this meticulously crafted world exploring the conflict leading into the War of the Ring during the late Third Age. The action takes place nearly 100 years prior to The Hobbit but long after the loss of the One Ring by Sauron. The key to Erebor has just been found by Gandalf in Dol Guldur and all the epic tales narrated in The Lord of the Rings may take place.

MUME covers 28,000+ original rooms from the mighty Dwarven Halls beyond the Gulf of the Lhûn in the West to the Mountains of Mirkwood in the East, and from the ruins of Fornost Erain in the North to the fortress of Isengard in the South.

Players can choose among several different races, each with some unique characteristics. The races are separated into three striving factions. Dwarves, Elves, Half-Elves, Hobbits and Men — among them are the shapeshifting Beornings — are eternally at war with the Orcs, Trolls and Black Númenóreans. Moreover, the orkish tribe of the Zaugurz is trying to expand its territory at the expense of the Tarkhnarb Orcs of Goblin Gate. Most of this conflict takes place to the east and south of the town of Bree, but rare raids or solitary agents of the Red Eye have made it to as far west as the Dwarven homes in the Blue Mountains.

Hey everyone,
We have a simple proposal: We looked it up and MUME 1 was launched on January 1992, which means MUME is officially 30 years old this month! While there is no day associated with it we could find, let us pick one, more specifically, the second Saturday of...